History of the Ashland Fire Department 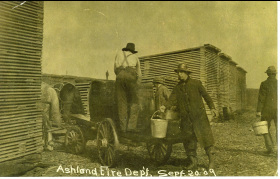 The Ashland Fire Department was established in 1883 as a volunteer fire service. The members of this department were affectionately known as the “Fire Laddie’s.” The volunteers started with minimal equipment and training. In the late 1800’s Ashland was a city made almost entirely of wood. Logging was a major industry of the time. Wood houses, wooden sidewalks, and several lumber mills in town created conditions very favorable for fires. Although dedicated to their task, the “Fire Laddie’s” with their buckets and wet blankets were not able to keep up with the firefighting demands. The Ashland town board organized and equipped an official volunteer service on June 18th, 1887. The Ashland Hook and Ladder Company #1 and the Bardon Hose Company #2, located at the Central Hose House at Fourth Avenue West and Third Street, were established at this time. The first ordinance, passed by the new City Council in April of 1887, set fire limits within the business district to stipulate that the buildings were to be built of fire proof materials. In 1888 the city took over control of the Hook and Ladder Company as well as the Bardon House. At that time the Central Hose House was changed to the Central Fire Station. The Ellis Hose Company, The Vaughn Hose Company, and the Beaser Hose Company were assembled. Each company consisted of a foreman, an assistant foreman, and ten firemen. The first fire department budget was $1500.00 to be shared among all five companies. In 1890 the department added the Durfee Hose Company and the Knight hose Company. 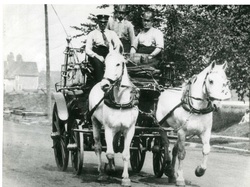 Until 1888 firefighters were notified of fires by church bells. At that time the city purchased the Gamewell Fire Alarm system. The alarm system was in use until 2008 when it was decommissioned. Fire alarms are now provided by automated dialers located in each business. In 1897 the city council created a paid Fire Department. Twenty one firemen including one chief were stationed at the various hose houses. Eleven of these men lived at the hose houses and were on constant duty. Nine were known as special firemen and were used as needed. In 1901 the equipment used included a chief’s buggy, one double forty chemical engine, one hook and ladder truck, two hose wagons, one hand-hose cart, three exercising wagons, and one small hook and ladder truck in reserve. In the course of a single year the hook and ladder company made sixty-two fire runs and traveled fifty three miles. Because it was a lake port, Ashland required one special piece of firefighting equipment, a Fire Boat. In 1901 the fire boat was a privately owned steam powered pump. The city paid $300.00 a year for it’s use. This was a small part of the fire department’s budget which in 1901 was $12,723.83. With the exception of the fire boat, none of the firefighting equipment was mechanized.

Fire horses were kept in the fire house, their stalls partitioned off from the main floor by overhead doors. When the alarm bells rang the doors were weighted and automatically rose. The horses were trained to leave their stalls on their own and back themselves into place beneath their harnesses hanging from the ceiling. Firemen could then quickly hitch them to the wagons and respond. The fire horses were special in numerous ways. They had to react quickly and correctly when an alarm sounded. These horses needed to be brave yet manageable when running at high speeds, as well as being able to wait patiently while at the scene of a fire.

﻿Ashland was fortunate to escape the ravages of large, city destroying fires experienced by most other pioneer communities. Ashland's most serious fires of the horse and buggy days occurred on the ore docks. In 1890, two firemen were killed and two seriously injured in a dock fire. At that time the city had no funds allocated for families of killed or injured firemen. In the 1891 city budget, funds were appropriated in the amount of $2500.00 for the Fireman’s Relief Fund and distributed to the families of the killed and injured firefighters. In late November of 1902, the Wisconsin Central Ore Dock, the largest in the world, burst into flames. With temperatures near zero, freezing equipment and men, firefighters had no hopes of controlling the fire. Several dock workers lost theirs lives in that fire.

Ashland bought it’s first steam fire pump in 1909 and it’s first motorized vehicle, a Nash Hose Wagon, in 1917. Following the Nash Hose Wagon the department then purchased a 1921 FWD Hook and Ladder truck. The Ellis Fire Station located on Stuntz Ave was built in 1920 and the Beaser Fire Station located on West Third Street was built in 1921. The Beaser Fire Station was closed as an active station in 1997.  At the same time a large metal building was erected directly next to the original Ellis Station to make room for the ever growing size of fire apparatus.  Both stations were sold and 1 centrally located station was built in 2015 which currently houses the Ashland Fire Dept.  The first mechanized pumper was a 1923 American LaFrance. The first major test of this new pumper occurred late 1924 when the Northwestern Ore Dock #2 caught fire. Firefighters encountered four hundred feet of burning ore dock. Due to the threat to the neighboring ore docks, the firefighters briefly considered dynamiting a fire break and letting the rest burn to ashes. Instead they called upon the neighboring departments of Ironwood and Superior. Both departments responded to Ashland in their open cab vehicles driving through a wind chill of thirty below zero. Their combined efforts eventually extinguished the blaze, but not until 175 of the 250 ore shoots were lost. ﻿ 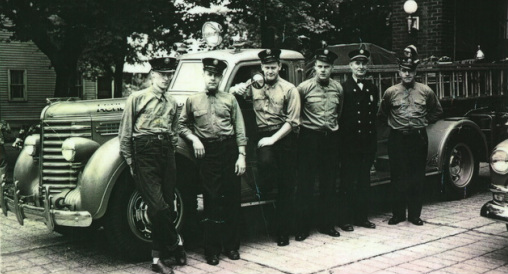 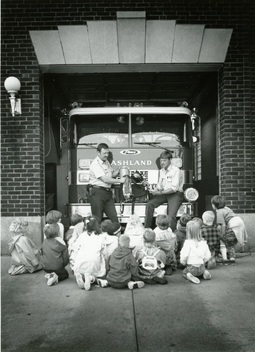 ﻿﻿In April 1926 Ashland suffered another large fire. The Dill Dormitory at Northland College caught fire. The fire started in the wooden shakes due to sparks from the chimney. The fire spread rapidly through the building. Fortunately no lives were lost during the fire. All forty women who lived in the dormitory were able to escape. In January 1945 the Saron Lutheran Church caught fire. The fire destroyed the church as well as two neighboring homes. Fortunately all 13 children attending Sunday School were evacuated unharmed. Another major blaze in Ashland's history was the Cram Inn fire of 1982. This fire started in the Cram Inn and spread to a vacant office building next door. Two people were trapped inside the building. Firefighters Bob Belsky and Skip Hafstad entered the building and rescued the two trapped people.

Up until 1967 the Ashland Fire Department was a standard firefighting Department. In 1967 the fire department took over the local ambulance service, previously operated as Ante’s Ambulance Service. Ante's requested to be subsidized by the city. The city believed that outright city ownership would be more economical and provide a better service. The first department ambulance was a 1961 Ford station wagon. It contained a cot borrowed from a local funeral home and a small first aid kit. It offered no real medical help, only transportation in a medical emergency. By 1971 six firefighters were trained as Emergency Medical Technicians. By 1987 the department was made up of seventeen EMT’s and six first responders. In 1994 the department became an EMT-Paramedic department. EMT-Paramedic is the highest level of pre-hospital care. Currently the department has 21 full time firefighter/paramedics, 3 full time firefighter/EMT's, and one paid-on-call firefighter paramedic. The Ashland Fire Department currently serves as fire protection and EMS provider for the City of Ashland as well as numerous surrounding townships. Our services also include Hazmat, Ice rescue, and mutual aid services to the surrounding fire ﻿departments. ﻿